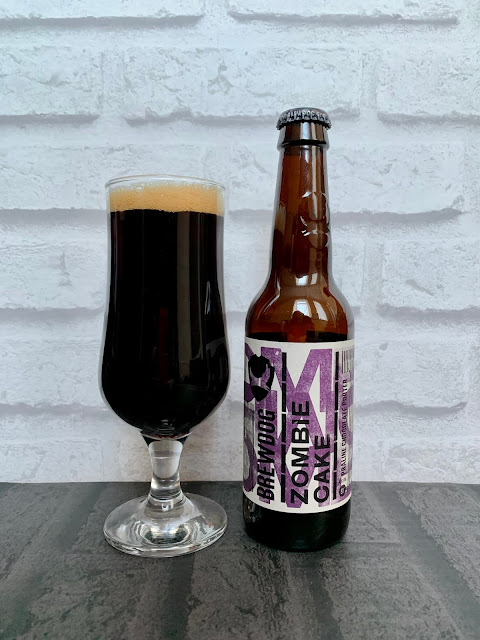 I love praline chocolates so I was desperate to get my hands on a bottle of Zombie Cake, BrewDog's praline chocolate porter but I have to say I was a little disappointed.
It's a very dark brown ale with a semi-tight robust beige head that leaves a good layer behind when it disperses.  The smell is amazing!  It does actually smell like praline with notes of nuts, chocolate, malt and treacle.  The nuttiness is lost in the taste though and I couldn't taste any nuts at all unfortunately.  The flavour is roasted malt, coffee and chocolate with the coffee lingering in the aftertaste.  Notes of chocolate do burst through at times but definitely no nuts for me.
It has a medium body and it's quite softly carbonated so it is very easy to drink.  It's a lovely porter but I don't think it's anything special.  It's definitely worth trying but Ale Not Be Seeing You again.
Brewed by BrewDog Brewery, Ellon, Aberdeenshire
5% ABV

My Untappd score: 3.75/5
Find out more at BrewDog Brewery
Posted by Michelle Ryles at 00:53 No comments: 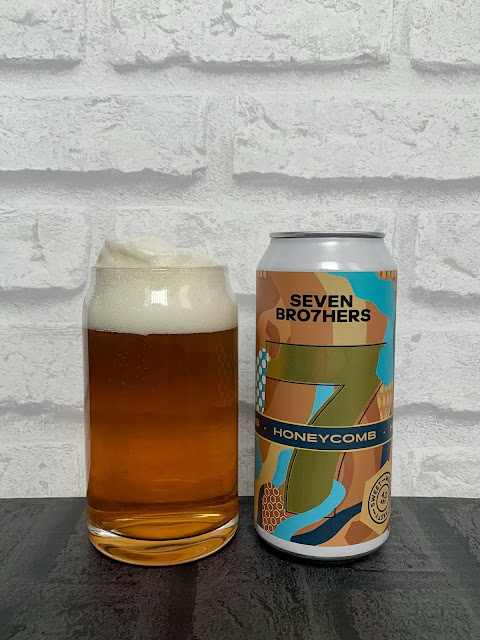 This beer was very eager to get out of the can.  It was very very lively and it took four pours to get it in the glass so it ended up a bit cloudy.  The colour is amazing, it is the deep golden colour of honeycomb and it's topped with a huge, frothy cream coloured head.
The aroma is very sweet and it does actually smell like honeycomb with some underlying maltiness.  I couldn't wait to taste it and I was not disappointed.  It is SO good; sweet honeycomb, malt and hops combine to create a taste explosion in the mouth.  It's actually not as sweet as I expected so Seven Bro7hers have got the balance just right with this one.
It's well carbonated but it's not as harsh as I expected from its lively appearance.  My tongue got a good tingling as little bubbles of honeycomb burst to release their amazing flavour.
Seven Bro7hers have got this one spot on; it really is a Crunchie in a glass and I could drink it all day long to satisfy my sweet tooth.  Ale Be Seeing You again and again!
Brewed by Seven Bro7hers Brewing Co, Manchester
4% ABV

My Untappd score: 4.5/5
Find out more at Seven Bro7hers Brewing Co
Posted by Michelle Ryles at 00:59 No comments: 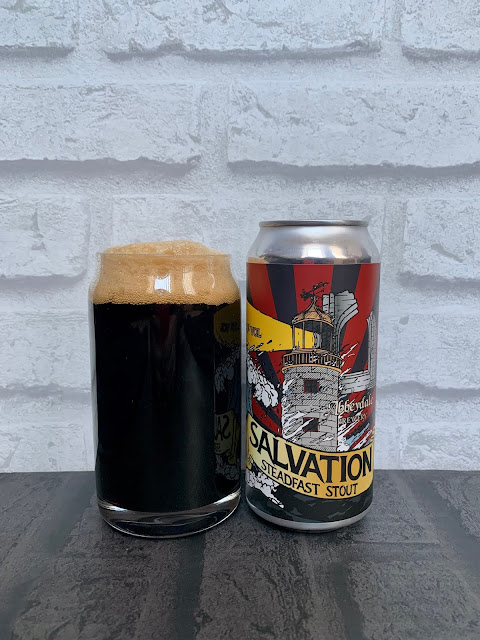 This is a deliciously dark vegan and gluten free stout with a huge, frothy, robust tan head.  It was very lively on opening so it took a few pours to get it all out of the can.
Abbeydale have said on the back of the can that they're keeping it simple with this one, so it doesn't have a strong aroma but I picked up notes of malt and a hint of chocolate.  With flavours of malt, chocolate and coffee this very fizzy stout prickles the tongue and the flavour seems to intensify as you drink it.  It's lovely and chocolatey but with a medium body, it feels a little on the thin side for a stout.
It's a pleasant, easy drinking normal stout but the intense fizziness is a bit weird so I don't think Ale Be Seeing You again.
Brewed by Abbeydale Brewery, Sheffield
4.5% ABV

My Untappd score: 3.5/5
Find out more at Abbeydale Brewery
Posted by Michelle Ryles at 00:24 No comments: 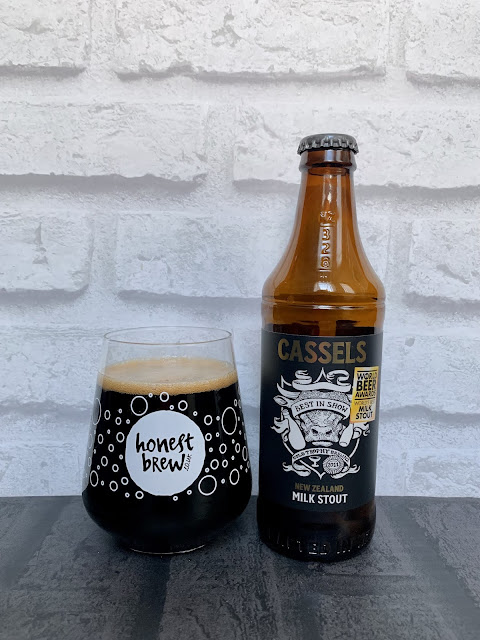 I picked up this little beauty for 99p in Home Bargains and what a bargain it is!  I was gutted (but completely unsurprised) that they'd sold out when I went back for more.
Popping the lid off this 328ml bottle produces the most mouthwatering aroma of malt, chocolate, coffee and a hint of dried fruit.  It's a beautiful black velvet colour but it has a very rapidly disappearing beige head that rather disappointingly doesn't even leave a single bubble behind.  Appearances can be deceptive though, so on to the taste...
This is delicious!  Complex flavours of chocolate, malt, roasted coffee and liquorice results in a different taste in every sip.  The balance is tipped towards sweet and there's a lovely sweetness that lingers on the tongue - it's right up my street with me being sweet-toothed.  It has a medium body and carbonation is quite low but firm and I could feel little sugary bubbles bursting on my tongue.
I can see why this was voted number 1 in its category in the 2020 World Beer Awards and I'll be keeping my eyes peeled to see if Home Bargains get this in again.  Make sure you grab one if you can!  Ale Be Seeing You again (hopefully).
Brewed by Cassels Brewery, New Zealand
5.2% ABV

My Untappd score: 4/5
Find out more at Cassels Brewery
Posted by Michelle Ryles at 00:54 No comments: 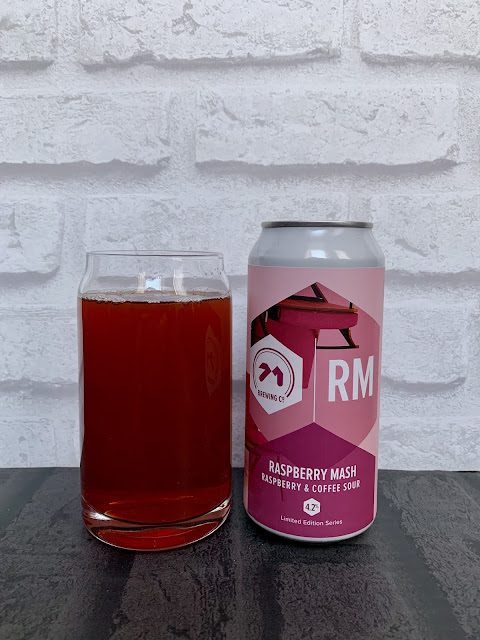 I don't drink a lot of sours so I really have to be in the mood for one and this limited edition raspberry and coffee mash from 71 Brewing caught my eye in one of Lidl's beer festivals.  Conditioned on Scottish raspberries and freshly ground Burundian 'Red Bourbon' coffee beans, it sounded so weird that I just had to try it.
It's a beautiful ruby red jewel colour but it's completely headless so it looks like a glass of raspberry pop.  It did produce a bit of foam at first but it disappeared mid-pour and, as it is unfiltered and unpasteurised, there is the possibility of a bit of sediment so it needs a careful pour.
There is no mistaking the aroma of fresh and juicy raspberries but it has a slight sour whiff that made me think of raspberry wine.  The hit of raspberries in the first sip is lovely; it's a fruity, tarty and sour flavour which is followed by a hint of coffee.  It's a very small hint though and I'm not sure I would have noticed it if I wasn't looking for it.  Although it looks quite flat, it's surprisingly well carbonated with a thin and watery body.
It's definitely a sour, so I have to give 71 Brewing credit for producing what it says on the can.  I just would have liked a bit more flavour as the raspberries take over but, because it's quite watery in body, it tastes quite weak after a few sips.  I'm glad I tried it but Ale not Be Seeing You again.
Brewed by 71 Brewing, Dundee
4.2% ABV