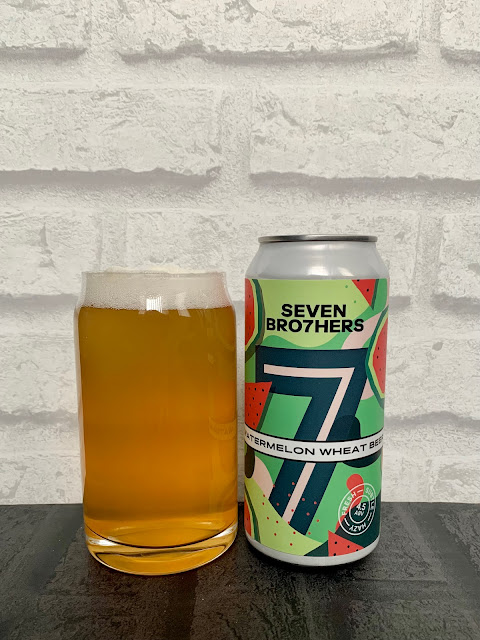 As you would expect from a wheat beer, this Watermelon wheat beer from Seven Bro7hers is very lively on opening so it took a few pours to get it all out of the can.  It's a lovely hazy golden yellow beer with a frothy off-white head that is quite loose but it lasts and laces.
Seven Bro7hers claim that this beer is summer in a can and it does indeed smell very summery with an aroma of juicy watermelon and a hint of sun-ripened strawberries.  It's quite a light aroma but you can definitely identify watermelon.
The flavour is disappointingly weak.  It tastes like weak, watery beer with a slice of watermelon thrown in to dilute it even further.  It doesn't have a lot of taste, but neither does watermelon really so I guess it is what it says on the can.  It's surprisingly softly carbonated for a wheat beer and the body is thin as expected.
It's a very refreshing beer but it definitely needs more flavour.  Watermelon doesn't have much taste but I expected some sweetness from strawberries and pineapple like it says on the can, but I didn't get any hint of that at all.  Not one I'd have again so unfortunately Ale not Be Seeing You!
Brewed by Seven Bro7hers Brewing Co, Manchester
4.5% ABV

My Untappd score: 3.25/5
Find out more at Seven Bro7hers Brewing Co
Posted by Michelle Ryles at 00:52 No comments: 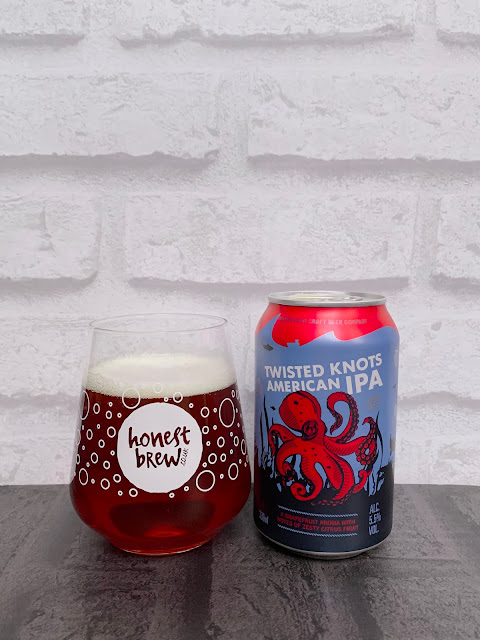 Twisted Knots is an American IPA that has been brewed exclusively for Lidl supermarket.  Priced at only 99p at the time of purchase, it really would have been rude not to try it.
It pours a beautiful amber colour with a small, reasonably robust cream coloured head.  The head disappears slowly but leaves a patchy layer behind.  It smells very hoppy, which is no surprise as it's jam packed with seven varieties of hops (Herkules, Columbus, Chinook, Cascade, Citra, Centennial and Amarillo), and it also has a slight metallic bitter hint.
The first sip really tingled my taste buds as flavours of malt, hops and spicy rye combined to give a surprisingly flavoursome ale.  It has a lovely bitter finish which is more metallic than citrus.  It's thin bodied with relatively low carbonation but the bubbles are quite tingly.
It's actually very nice for a budget beer.  With the bitterness being more metallic than citrus and the lovely spiciness of the rye, it's my kind of IPA.  Although it didn't score highly, I really can't complain for under £1 for a 330ml can, so Ale Be Seeing You again.
Brewed by Hatherwood Brewery for Lidl UK
5.5% ABV 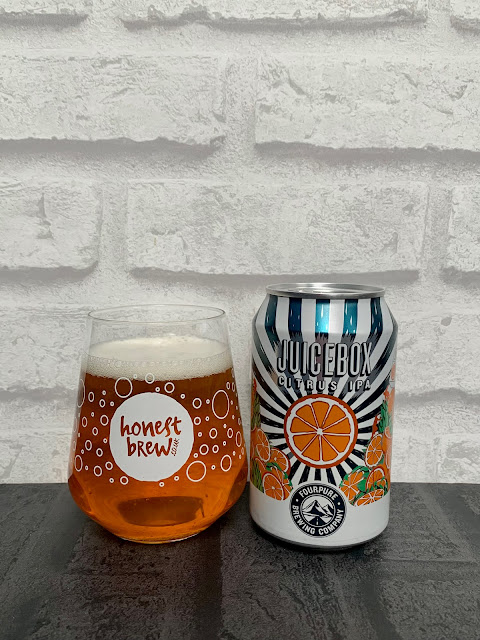 I was drawn to Juicebox, Fourpure's citrus IPA, by the striking can - it's certainly very eye-catching and I wanted to see just how orangey it is.
It's a lovely clear golden beer with a small, loose, off-white head that leaves behind a small layer on dispersal.  It smells SO fruity - oranges (of course) as well as mango.  It's more of a sweet fruit aroma rather than bitter citrus.
The flavour is predominantly citrus but it has a slight floral note from the papaya and a sweetness from the mango.  The orange citrus is not pithy at all and more sweet than bitter.  It's quite a thin bodied beer with low, tingly carbonation.
Juicebox is a very refreshing citrus IPA and it feels like a very summery beer.  It's not as fruity as I expected as it has more of a balanced flavour from the mixture of orange, mango and papaya.  I'm glad I tried it, but Ale not Be Seeing You again.
Brewed by Fourpure Brewing Co., London
5.9% ABV

My Untappd score: 3/5
Find out more at Fourpure Brewing Co.
Posted by Michelle Ryles at 00:48 No comments: 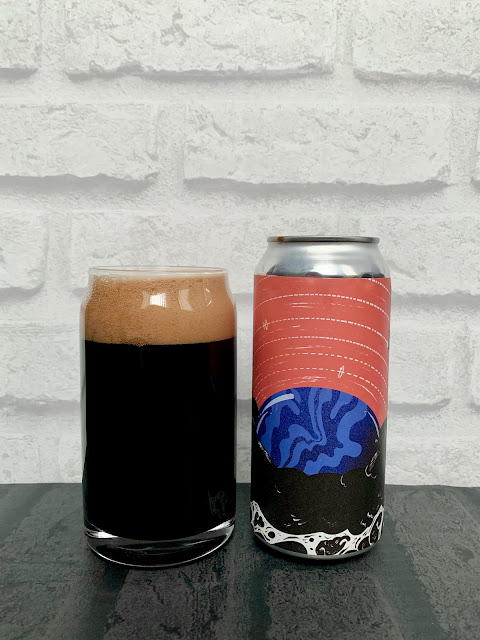 Instrinsic Value is a vanilla and blueberry imperial stout brewed by Bristol brewers Left Handed Giant (LHG) in collaboration with Los Angeles brewers Highland Park Brewery.
As you would expect from a beer brewed with fruit, there is some sediment in the can so it needs a careful pour.  It pours a very dark brown with a huge, tight deep tan coloured head which is possibly the darkest coloured head I've ever seen.
It has a very distinctive and appealing aroma of chocolate, vanilla, malt and fruity blueberries so this is a beer that smells as good as it looks.  The all-important taste is not disappointing at all; it is delicious.  Smooth milk chocolate, fruity blueberries, sweet malt and vanilla all combine beautifully.  It's actually not as sweet as I expected, it's a bit earthy, woody and dry with a bitter chocolate finish.  A hint of blueberries keeps appearing every now and again.
It's a very full bodied beer that's well carbonated to give a bit of a tingle to an otherwise smooth mouthfeel.  With such a high ABV of 11% there's not even a hint of raw alcohol in the taste but it's quite warming which makes it feel incredibly boozy.
LHG have produced some cracking beers and Intrinsic Value is no exception.  I would definitely recommend this imperial stout and Ale Be Seeing You again!
Brewed by Left Handed Giant Brewing, Bristol
11% ABV

My Untappd score: 4.25/5
Find out more at Left Handed Giant Brewing
Posted by Michelle Ryles at 00:54 No comments: 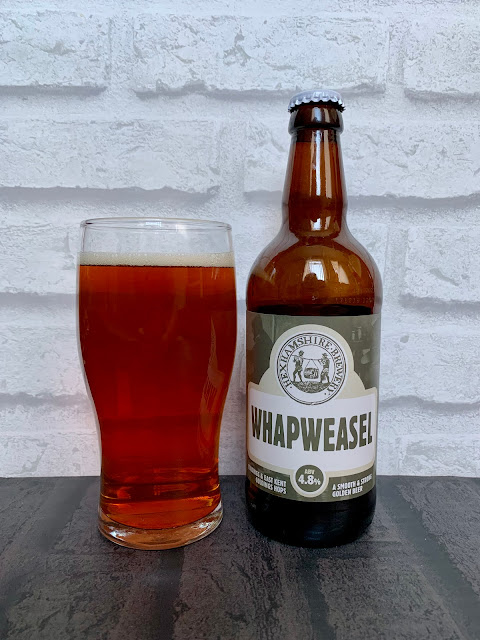 Whapweasel is such a great name that the beer has a lot to live up to but thankfully it does deliver.
It's a light amber/dark golden beer with a small, loose, rapidly vanishing cream coloured head.  A few foam patches remain but it quickly has a flat appearance, which is a shame.
It has a lipsmacking aroma of sweet caramel, malt, and sticky toffee pudding and the taste is similarly mouthwatering.  Sweet caramel and malt combine with tangy hops to give an almost trappist taste and the slight bitter finish lingers on the tongue.  The body is medium and carbonation is decent with softish bubbles that caress the tongue.
This is a delicious bitter that's as memorable as its name and Ale Be Seeing You again!
Brewed by Hexhamshire Brewery, Northumberland
4.8% ABV

My Untappd score: 4/5
Find out more at Hexhamshire Brewery
Posted by Michelle Ryles at 00:54 No comments: 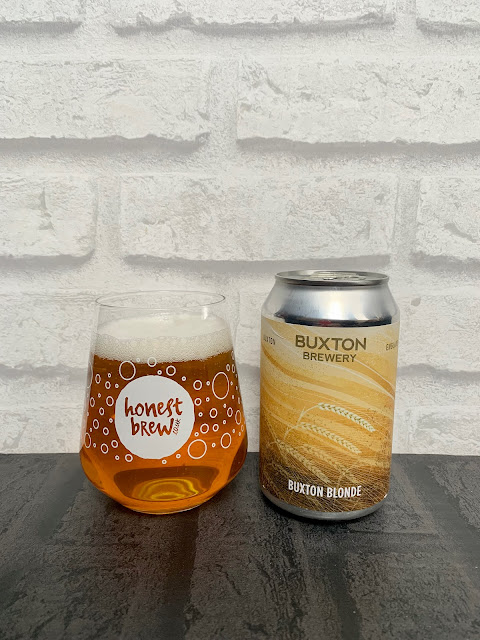 Buxton Blonde is a deep golden yellow ale with a frothy, reasonably tight off-white coloured head that dissipates to leave a nice layer of foam.  Aroma is biscuit, caramel and yellow fruit.  It's not a strong aroma but it is pleasant.
Malt, caramel, honey and hops dominate the flavour with a slight bitter citrus finish that isn't pithy at all.  It's thin bodied but not watery and has good carbonation that's fizzy enough without being harsh.
Incredibly refreshing and easy to drink, i's a lovely biscuity blonde ale with a bitter finish.  It's not currently brewed by Buxton but if it was, Ale Be Seeing You as it's a lovely summery ale.
Brewed by Buxton Brewery, Buxton, Derbyshire
4.6% ABV

My Untappd score: 3.5/5
Find out more at Buxton Brewery
Posted by Michelle Ryles at 00:27 No comments: 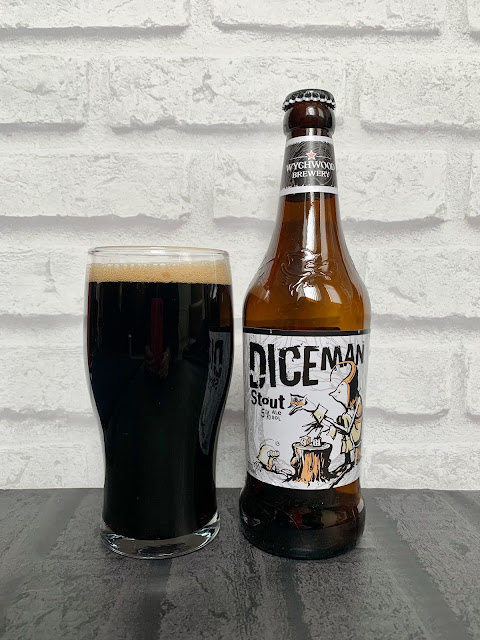 Wychwood is a brewery that rarely disappoints and Diceman is no exception.
It's a jet black stout with a thick, tight, beige head that is surprisingly robust.  The aroma is a little uninspiring; malt and treacle on a strong metallic base, however, the ale redeems itself in the taste test.  It is a lovely stout with notes of treacle, malt, dark fruit, and liquorice followed by a hint of chocolate to give a bittersweet chocolate finish.
It has a medium body and it's well carbonated with hard but not harsh bubbles that somehow manage to give a silky smooth mouthfeel.
Diceman is like a liquorice toffee in a glass and I loved it.  It's just a shame it lost a few points in the aroma as it deserves a higher score than 3.75/5.  It's the taste that counts so Ale Be Seeing You again!
Brewed by Wychwood Brewery, Witney, Oxfordshire
5% ABV

My Untappd score: 3.75/5
Find out more at Wychwood Brewery
Posted by Michelle Ryles at 00:19 No comments: