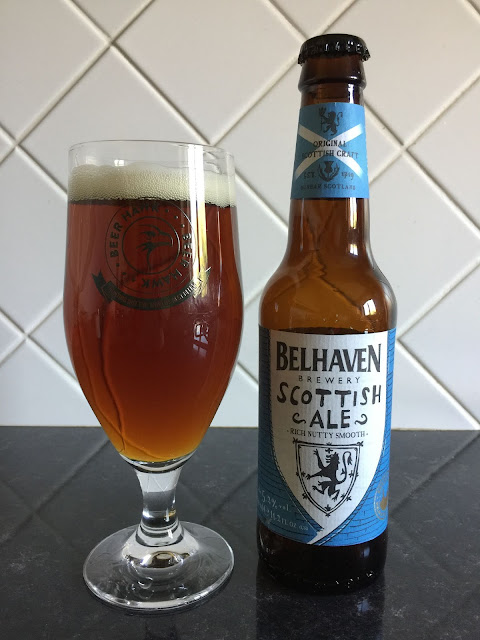 When I poured Belhaven's Scottish Ale I hoped that it tasted as good as it looked and I'm delighted to say that it far exceeded my expectations.  It's such a beautiful chestnut brown colour, slightly hazy, with a thick frothy beige coloured head.

It has such a mouthwatering aroma of sweet malt and nutty biscuits with both flavours being replicated in the taste, along with notes of caramel and buttered bread.  The creamy buttery nutty taste melts on the tongue and is followed by a slightly quirky bitter aftertaste that I can only describe as licking stamps, which I rather strangely enjoy.  It's a full bodied ale with a decent amount of carbonation to give a little tongue tickle with each mouthful.

I really wasn't expecting to enjoy this as much as I did and there's only one negative thing I about it: it was only in a 330ml bottle and like Oliver Twist, I wanted more!  It's a good quality ale that scores near to top marks on my palate.  I love a strong malty flavour so this hits the spot for me and Ale Be Seeing You Again!

Find out more at Belhaven Brewery
Posted by Michelle Ryles at 00:30 No comments: 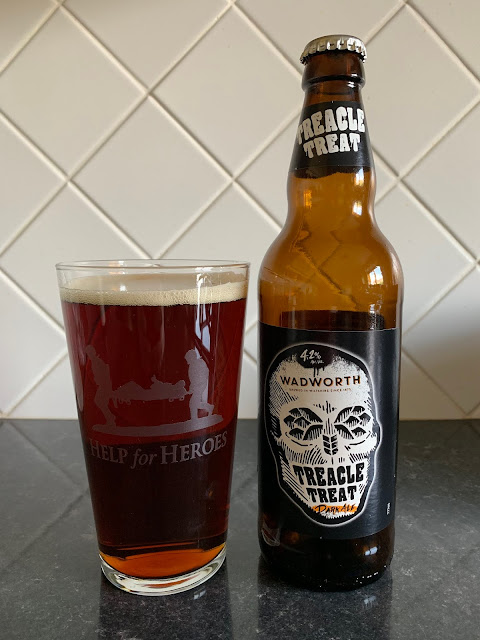 Wadworth's Treacle Treat looks like my kind of beer!  It's a deep mahogany red/brown colour with a tight but small beige head.

It scores full marks for aroma with mouthwatering smells of treacle (naturally), burnt caramel, sweet molasses, dark fruit and malt.  I couldn't wait to dive in but unfortunately the mouthwatering aromas weren't replicated in the taste.  It has a flavour of caramel, burnt toffee and slight citrus bitterness but I couldn't detect any treacle at all.  It was so disappointing that it didn't quite live up to, not only my expectation, but its very name.

Watery and thin-bodied, it has average carbonation and the bitterness even tasted kind of soapy.  Although by no means a bad beer, it was very disappointing based on what I expected it to be.  It's definitely a Halloween beer and I think I've been tricked as I definitely wasn't treated to any treacle 😢.

Find out more at Wadworth Brewery
Posted by Michelle Ryles at 00:40 No comments: 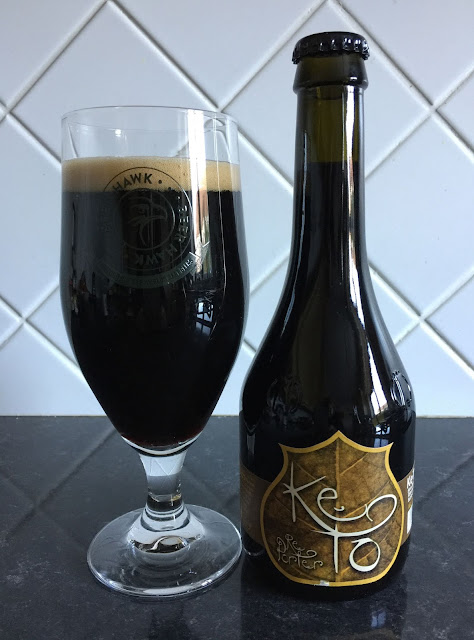 KeTo is a porter from my Birra del Borgo variety pack of ales.  KeTo is a very dark brown almost black colour with a frothy light brown head that disperses rapidly, leaving a thin layer.


Oh what a mouthwatering aroma!  It's VERY malty with hints of liquorice, chocolate and coffee; it's almost like you get a different aroma with every sniff.  Just like I was surprised with the taste from Cortigiana, KeTo also had a big surprise up its sleeve, namely a distinct smoky flavour.  Now usually this would make me retch as nobody likes to experience what I can only describe as licking an ashtray, but with KeTo it mixes surprisingly well with the sweet malt and hint of bitter chocolate.  The tobacco flavour is definitely there but it's not overpowering and works well with the complex flavours.  I also detected a slight spiciness that reminded me of cola.

It's very smooth and full bodied, as you would expect from a porter and it's so softly carbonated that each mouthful gives your tongue a little tickle.  Although it feels like quite a light porter, it packs a surprising punch at 6.5% ABV.  With the adventurous mix of flavours, it's something quite different and one I'd definitely recommend trying.

Find out more at Birra del Borgo
Posted by Michelle Ryles at 00:25 No comments: 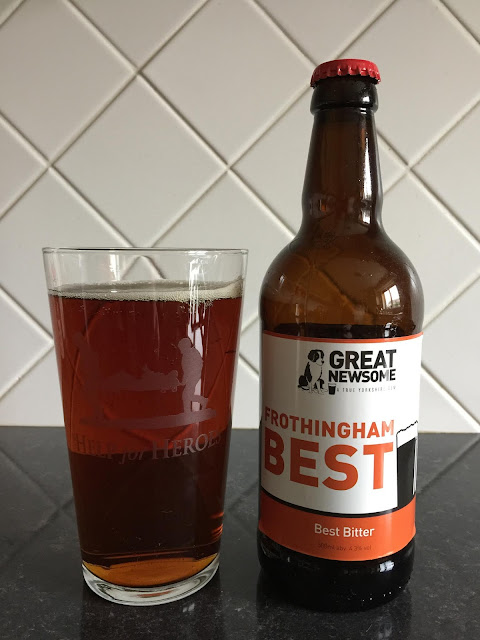 Now this is just the kind of colour I like my ale: a deep amber reminiscent of molten toffee.  It's a shame it has so little head to complete the perfect picture; the head that is there is very small. consisting of a few beige bubbles that disappear rapidly, leaving just a whisper of foam.

The aroma of malt and sweet caramel gets a big thumbs up for me and there is a slight whiff of sour hops to follow.  The malt aroma transfers on into the taste but the maltiness is very subtle and not as strong as I expected.  The strength of bitterness caught me by surprise with a huge kick of citrus and a metallic tang that lingers far longer than anything I have tasted before.  With such a watery appearance, it's unsurprising a rather thin bodied ale and with little carbonation, feels quite smooth on the palate.

Overall it's a pretty decent English bitter, but it's such a shame that it appears flat and headless.  The lingering bitterness both surprised and delighted me, especially as I'm not a fan of citrus flavours but in this bitter it just seems to work.  Although it's not a beer I'd keep in stock, I'd certainly have another pint if I saw it on draught.

Find out more at Great Newsome Brewery
Posted by Michelle Ryles at 00:46 No comments: 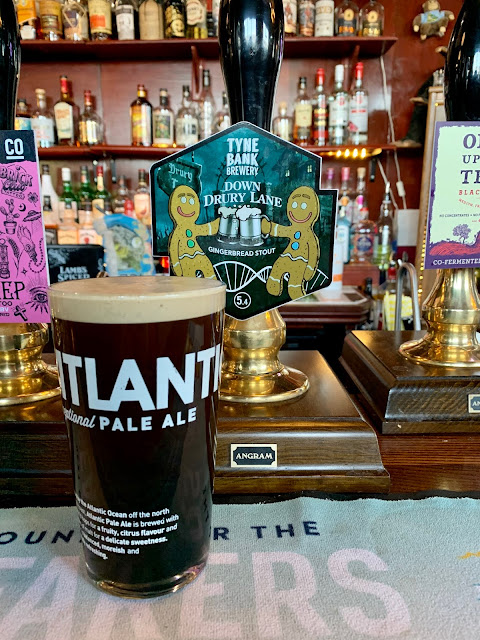 I recently downloaded the Real Ale Finder app and spotted that one of my favourite local breweries had released a gingerbread stout.  I absolutely love ginger spices and it's not just for Christmas in my house!  The very next day I made my way down to The Steamboat in South Shields to try Tyne Bank's Down Drury Lane for myself.

It's a lovely dark chocolate brown colour but very opaque, more milky than cloudy due to the use of oat milk in the brewing process.  The light brown head is amazingly tight and it's one that Guinness would be proud of.  I was almost quivering with anticipation to get my first mouthwatering whiff of ginger, but sadly couldn't detect anything remotely ginger-like in the aroma.  The smell is hard to describe, it's perhaps most reminiscent of sweet raisins and bitter chocolate.

Ok, so no ginger in the smell...on to the taste.  The first thing I noticed is that there is NO GINGER!  Oh no, I could have cried.  My only concern before tasting it was whether it would be gingery enough; I didn't expect it to not be gingery at all.  The taste is very odd indeed, tangy, sour and bitter but no spiciness.  If I had to describe it, I'd say it was a chocolate milkshake that had been made with sour milk and had a dash of coffee added to it then mixed into a stout.  Rather thin-bodied but very smooth, as a funky stout experiment it's not bad by any means but it was just not what I expected.

Not one I'd recommend or Ale Be Seeing Again, unfortunately.  I desperately wanted to detect some ginger but I don't think even Sherlock Holmes could have detected it.

Find out more at Tyne Bank Brewery
Posted by Michelle Ryles at 17:18 No comments: