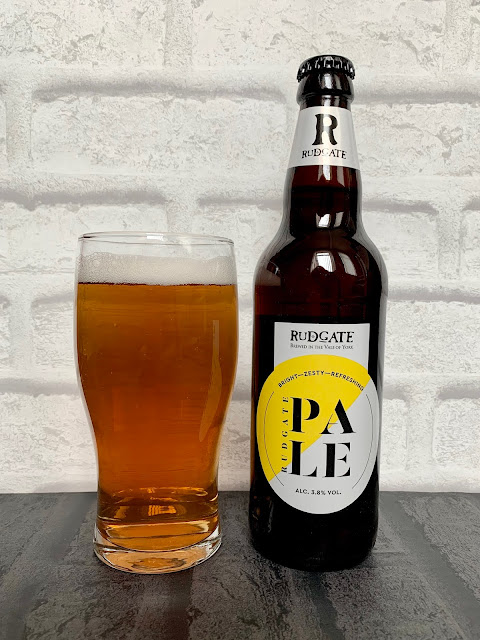 A mixed pack from Rudgate in York was one of the first (of many) packs of beer I bought when the UK went into lockdown.  I hadn't tried any of their beers before so I thought I'd start light with their pale ale.

When I first started to pour it, I thought it was almost colourless then it appeared to have a strange pink hue.  I started to get nervous and wondered if Rudgate had bottled pink champagne instead of pale ale.  It turned out a surprisingly nice light golden colour with a small, relatively loose off white head that holds on for a while to leave a thin foam layer.  There is some sediment in the bottle so it needs a careful pour to get a clear pint.

The aroma is deliciously hoppy with hints of honey and caramel along with zesty citrus and tropical fruits.  The flavour, however, is disappointingly weak with very little taste.  The initial taste is predominantly hops, honey and straw but it does develop slightly over time to become more fruity.  There is a slight citrus bitterness to the aftertaste and, as I'm not much of a fan of pithy citrus, the citrus flavour is subtle enough to be palatable for me.

Although it has decent carbonation, it has a very thin and watery mouthfeel but then again it's quite a light beer at 3.8%.  It's not terribly tasty but it's very light, clean and refreshing; it's what I would call a nice summery day beer - it'll quench your thirst without having you dancing on the tables.

Find out more at Rudgate Brewery
Posted by Michelle Ryles at 00:38