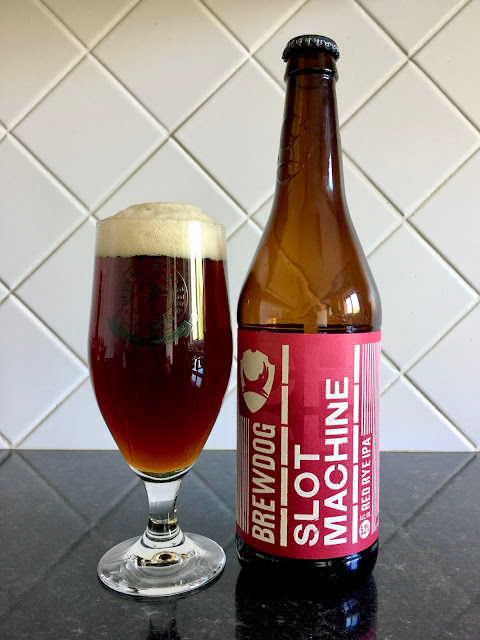 It's not an optical illusion (or a very small glass), this is a 660ml gigantic bottle of Slot Machine, a red rye IPA from Scottish brewers, BrewDog.  It pours a beautiful russet brown colour with a huge frothy but tight beige head.


The aroma is mainly malt and biscuit with hints of citrus fruits and warm spice.  The initial flavour is predominantly citrus followed by a floral, spicy taste.  As you drink it, the citrus flavour seems to diminish and more toffee and caramel flavours develop.  The citrus flavour remains throughout to give a lingering bitter aftertaste.

Surprisingly softly carbonated, it has an almost smooth mouthfeel and is a full bodied ale.  The head leaves good lacing on the glass and I loved the developing toffee flavour which takes the edge off the initial citrus hit.  The spicy rye flavour is well balanced, giving more of a hint than a full hit which can often take over.

It's a decent red rye IPA and very drinkable, which is just as well as I got two full 330ml glasses out of the oversized bottle.

Find out more at BrewDog Brewery
Posted by Michelle Ryles at 00:56