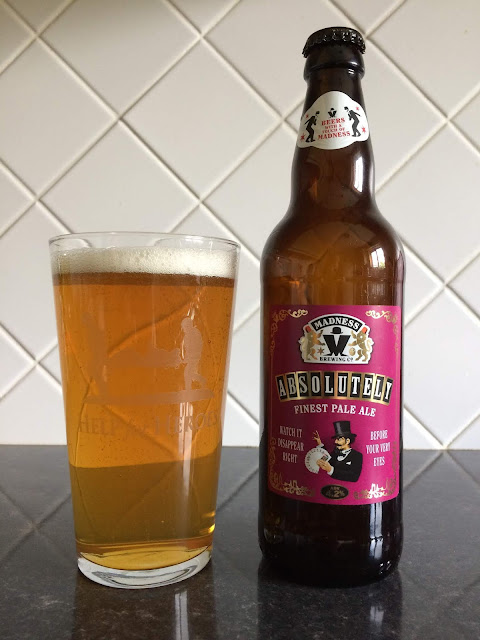 I didn't realise when I bought it that like Iron Maiden, the group Madness have put their name to a selection of beers brewed initially by Portobello Brewery but now produced by The Great Yorkshire Brewery.  I actually picked this one up as the label caught my eye and I like to lighten my drinking of dark and ruby ales with a pale ale now and again.

This pours a beautiful clear golden yellow colour with a tight off-white head that doesn't budge even a millimetre.  Along with a whiff of hops, it has a very citrus and tropical aroma that made me think of pineapples and lemons.

Rather thin bodied and softly carbonated, the initial flavour of straw, biscuit and hops gives way to a bitter citrus aftertaste.  It all makes for a very crisp, dry and refreshing beer with just the right amount of citrus for me.

Very easy to drink, it leaves amazing lacing on the glass and it's rare for me to say it about a pale ale but I would be happy to have it again.

Find out more at The Great Yorkshire Brewery
Posted by Michelle Ryles at 00:15