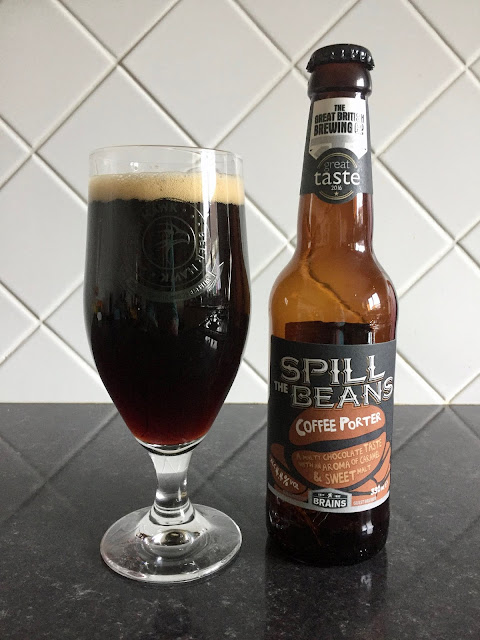 Time to visit the dark side with a coffee porter brewed for Aldi by Welsh brewery, Brains.  Now this definitely gets full marks for appearance.  What a thing of beauty!  Dark and delicious this a dark brown ale with a thick, tight beige coloured head.

The first thing I noticed about the aroma was the distinct lack of coffee smell; instead I got hints of lovely sweet malt, treacle and chocolate.  I do sometimes find coffee aroma rather off-putting in a beer so this got a big thumbs up for me, although I was slightly concerned that Spill the Beans wasn't going to live up to its name.

I needn't have worried and I should've known that the fabulous guys and gals at Brains would come up trumps!  The first sip results in a delightful mix of dark malt and sweet chocolate exploding in the mouth followed by the most amazing aftertaste of coffee.  Now this is really difficult to get right as we all know that coffee and chocolate can be very bitter, especially when they appear together.  Somehow, this isn't bitter at all; it's sweet rather than bitter but there's no doubt that the coffee flavour is there.

Softly carbonated and very full bodied, Spill the Beans in much nicer than I imagined.  I bought it as a bit of a gimmick and also I was swayed by a bargain as it was less than £1, but I was very pleasantly surprised.  The coffee taste is simultaneously subtle enough to not be overpowering but strong enough to remind you that it is there.  It's an outstanding porter and one Ale Be Seeing Again.

Find out more at Brains Brewery
Posted by Michelle Ryles at 00:08