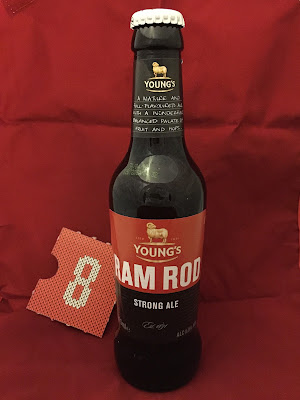 Door number 8 produced a Ram Rod strong ale from Young's.  I've never heard of this ale so I was surprised it had been around for so long.  It's 5% ABV in a 275ml bottle and is described as:

Named after the magnificent Dorset Horn ram on which the Young's trademark is based, Ram Rod has been one of Young's most famous ales for over 30 years.  A strong, mature and full flavoured ale for savouring with a wonderfully balanced palate of fruit and hops.  Brewed using Fuggles, Golding and Target hops and a blend of Maris Otter and Crystal barley malt.
Posted by Michelle Ryles at 11:00