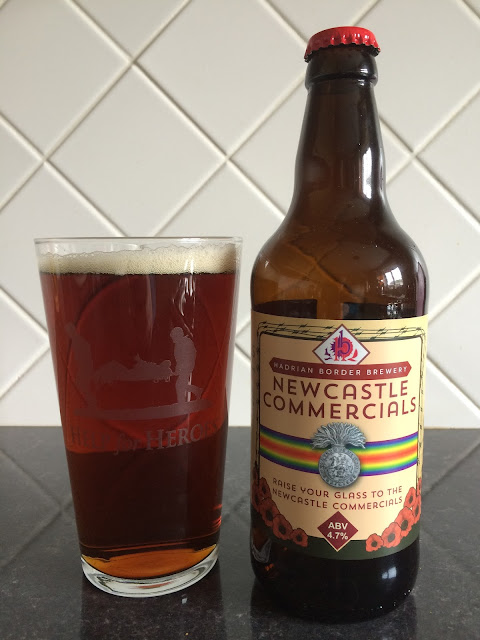 A different Newcastle brown ale to the famous one brewed and mass produced by S&N, this ale from Hadrian Border brewery was brewed to commemorate the centenary of World War I and some of the proceeds are going towards events planned to commemorate the 100 year anniversary of the end of the great war in 2018.


They shall grow not old, as we that are left grow old:
Age shall not weary them, nor the years condemn.
At the going down of the sun and in the morning
We will remember them.

This is a deep chestnut brown ale with a small but thick frothy beige head.  It has an amazing malty, chocolate and treacle aroma that is replicated in the lovely taste.  It has a slightly bitter aftertaste once the maltiness wears off but that's easily dealt with by taking another sip, and this delicious addictive beer encourages you to do so.

It's softly carbonated making it a very smooth drink with the thick head remaining until the end, leaving heavy lacing on the glass.  With malty sweetness, chocolate hints and a citrus burst at the end, it is indeed a fitting ale for heroes.

A very nice brown ale and, although it was a limited edition, it bears a striking similarity to Hadrian Border Brewery's Tyneside Brown so I do believe that Ale Be Seeing You Again.

Find out more at Hadrian Border Brewery
Posted by Michelle Ryles at 12:55