Innis & Gun Mangoes on the Run Mangoes on the Run is a beautiful deep golden, orange hued ale with a large, frothy, and surprisingly robust off-white head.  There is no sediment at all so I got every last drop out of the can.
I was expecting a strong smell of fruit when I opened it but it's mainly just hops with a slight hint of fruit that's more citrus than mango.  Although I was a little disappointed with the aroma, it redeemed itself in the taste.  It's definitely mango!  The flavour is very hoppy with notes of caramel, biscuit and citrus and it has a very bitter, pithy citrus aftertaste that lingers.
It's thin bodied with low, reasonably soft carbonation that feels quite smooth in the mouth with a little bit of a tingle on the tongue.
It's what it says on the tin and Innis & Gunn deserve a round of applause for getting the unmistakeable taste of mango just right.  The pithy aftertaste was a little too harsh for me which is where it lost marks so although Ale not Be Seeing You again, it's worth trying if you like pithy bitterness.
Brewed by The Innis & Gunn Brewing Company, Edinburgh, Scotland
5.6% ABV

My Untappd score: 3.25/5
Find out more at The Innis & Gunn Brewing Company
Posted by Michelle Ryles at 00:09 No comments: 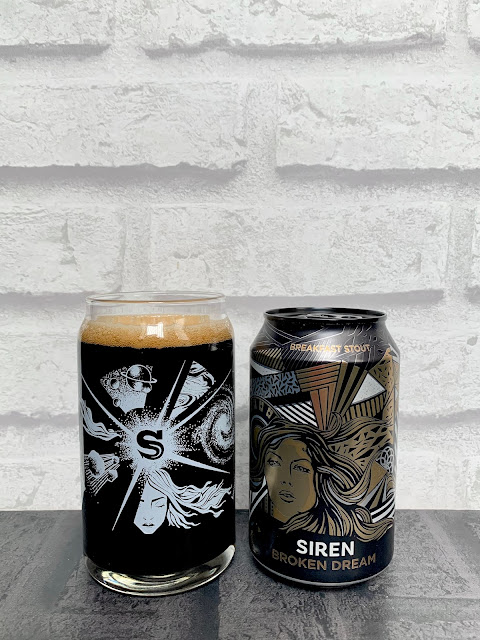 Broken Dream from Siren is a deliciously dark stout brewed with lactose.  It's a dark brown ale with a decent sized tan head that's very loose and quickly disperses to leave a flat appearance.
It gets full marks for aroma with notes of coffee, chocolate and malt.  It smells so rich and decadent that I couldn't wait for my first sip.  The taste is lovely; much like the aroma, it's a mouthwatering combination of coffee, chocolate and malt.  The sweet chocolate (and lactose) takes the edge of the bitter coffee to give a perfectly balanced stout.
It's a medium bodied, semi-smooth stout with low, tingly carbonation.  It's not one of the more expensive stouts either - currently priced around £2.30 for a 330ml can, which is amazing value for money.  It's so tasty that Ale definitely Be Seeing You again.
Brewed by Siren Craft Brew, Berkshire
6.5% ABV

My Untappd score: 4.25/5
Find out more at Siren Craft Brew
Posted by Michelle Ryles at 00:54 No comments: 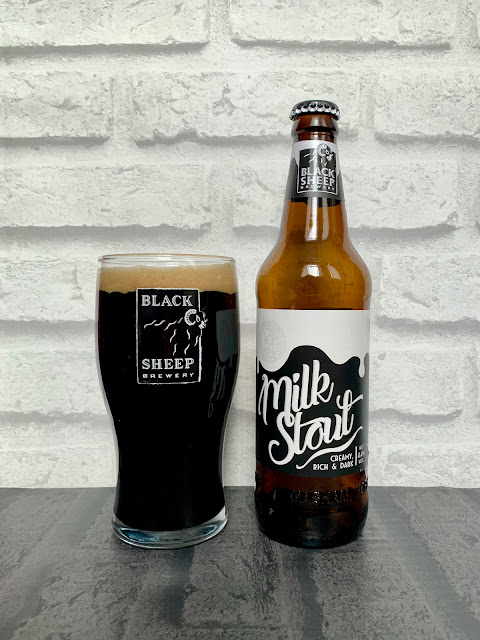 Black Sheep is one of my favourite breweries so I had high hopes for their award winning Milk Stout and I was not disappointed.
Brewed with lactose, it's a velvety black stout with a tan head that is thick, tight, creamy and robust, as we have come to expect from Black Sheep.  The head lasts a lot longer than the beer did, that's for sure!
The aroma is quite light with notes of malt, chocolate and hops that you would expect in a stout.  The flavour is delicious; it's so chocolatey and malty that it's almost the same sort of flavour as a chocolate Horlicks.  It's so smooth, creamy and full-bodied that it's silky smooth in the mouth.  It's perfectly carbonated - it's not too fizzy so it retains a lovely smooth mouthfeel.
It's a very well-balanced stout with an initial hit of sweet malt and vanilla contrasting with a slightly bitter chocolate and coffee finish.  It feels like a hug in a glass - it's so delicious and easy to drink that Ale definitely Be Seeing You again!
Brewed by Black Sheep Brewery, Masham, North Yorkshire
4.4% ABV

My Untappd score: 4.25/5
Find out more at Black Sheep Brewery
Posted by Michelle Ryles at 00:34 No comments: 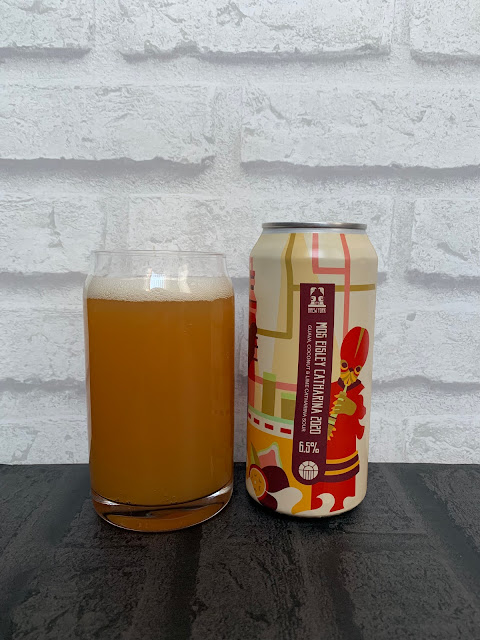 As a Star Wars fan I just had to try this guava, coconut and lime sour from Brew York and I was not disappointed.  It looks, smells and tastes like it could be served at the Mos Eisley Cantina.
It's a hazy golden yellow beer with a small, loose, rapidly vanishing head that ends up looking like a glass of fruit juice.  It smells like juice too with a delicious fruity aroma of guava, sour fruit and a hint of coconut.  It has a strange sweaty smell too so it's not an overly appealing fragrance.
Thankfully, it didn't taste sweaty!  The mix of guava, lime and coconut is delicious and although the tangy fruit flavour isn't mouthpuckering, it's definitely a sour.  It has a medium body and low, prickly carbonation so it has a smooth mouthfeel like fruit juice but with an added bit of fizz.
Very fruity and refreshing, it tastes quite boozy and the flavour develops as you drink it to really bring out the lime and coconut flavour that had originally been overpowered by the guava.
I'm not sure I would call a sour a beer so they're not my usual tipple but with a Star Wars theme, it had to be done.  I'd recommend trying it but I wouldn't necessarily have another one as it was a bit of a gimmick for me.
Brewed by Brew York Brewery, York
6.5% ABV

My Untappd score: 3.5/5
Find out more at Brew York Brewery
Posted by Michelle Ryles at 00:55 No comments: