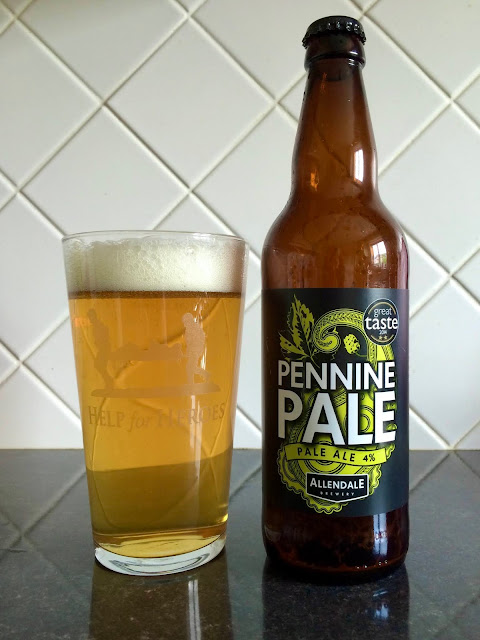 Pennine Pale is a traditional looking pale ale from Northumberland brewers, Allendale.  It's a lovely golden yellow colour with a thick, bright white head that leaves thick lacing on the side of the glass.
It has an intensely fruity aroma, mainly citrus but with some tropical fruit notes and a hint of hops too.  The flavour is unsurprisingly citrus initially but it combines with the hops and malt flavours to take the edge off the bitterness. It's zesty and refreshing without being too pithy and is one of the few citrusy ales I find palatable.
Quite softly carbonated, it has a smooth mouthfeel with little bubbles of bitterness bursting on the tongue.  Pennine Pale is another quality ale from Allendale and a cold one would be perfect to quench your thirst on a hot summer day.  When I fancy something a bit zesty, Ale Be Seeing You again.
Brewed by Allendale Brewery, Northumberland
4% ABV

My Untappd score: 3.75/5
Find out more at Allendale Brewery
Posted by Michelle Ryles at 00:52 No comments: 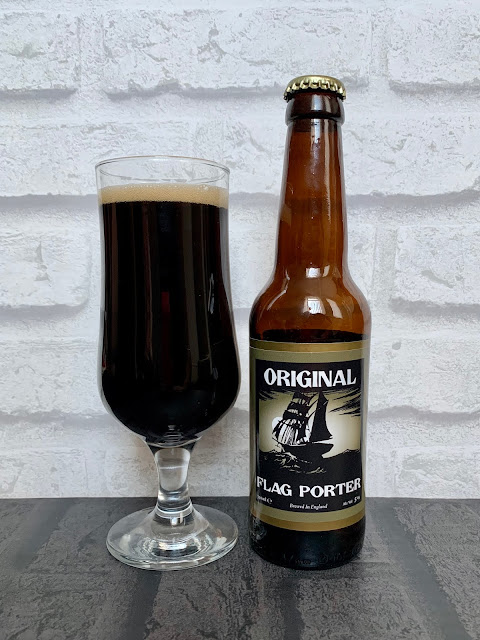 When I read the story behind Darwin's Original Flag Porter, I just had to try it.  This porter is brewed to a 19th century recipe using yeast salvaged from a sailing barge that sank in the English Channel in 1825.  The barge was carrying bottles and casks of porter and as the bottles were sealed with wax, many of them remained intact when they were brought to the surface in 1988.  The yeast contained in the porter was cultured and brewed to produce Flag Porter.
It does make a stunning looking porter when poured into a glass.  It's a very dark brown ale with a ruby tinge and a small, loose beige head.  The head disperses quickly to leave a patchy foam that congregates around the side of the glass.
The smell is absolutely amazing: it is very malty with notes of liquorice and treacle.  It's definitely what I would call a dark and delicious smell and it's right up my street.  All of the aromas transfer to the flavour with the malt, liquorice and treacle combining along with a slightly spicy flavour to produce a light, refreshing ale with a dry finish.  It's a very well balanced ale that just nudges over into the sweet category but doesn't feel over-sweet as the liquorice flavour develops.
I was torn between wanting to guzzle it all and savouring the small (330ml) quantity I had in my glass.  I ended up savouring it and really felt the liquorice flavour developing with each sip, the only downside being it ended up feeling a bit flat and watery as it's very softly carbonated to begin with.
I wasn't surprised to see it stated on the label that Original Flag Porter is featured in the book 300 Beers to Try Before You Die and deservedly so; it's not just a lovely porter, it has such an unusual story behind it's conception.  Original Flag Porter, Ale Be Seeing You again and I wholeheartedly recommend other beer lovers to try it.
Brewed by Darwin Brewery, Sunderland
5% ABV

My Untappd score: 4.25/5
Find out more at Darwin Brewery
Posted by Michelle Ryles at 00:56 No comments: 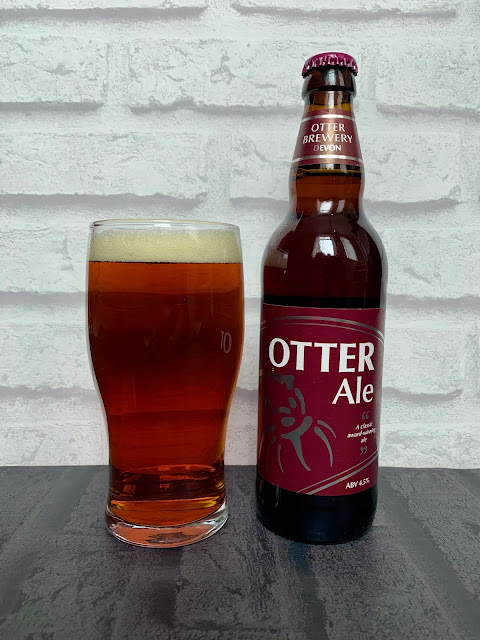 I have never had a bad Otter Brewery beer and Otter Ale is no exception.  Just look at how beautiful Otter Ale is.  It's a vibrant amber colour with a loose, frothy cream coloured head; although the head doesn't last long, leaving a thin, patchy layer.
It has a very traditional beery smell of hops, caramel, dark fruits, malt and a hint of spice.  The caramel and dark fruits give the aroma a more sweet than bitter balance.  It's so deliciously malty that I couldn't wait to have a sip.
What a fabulously balanced flavour!  It is very malty with a burnt caramel taste and a dry and bitter finish.  The bitterness is only slightly citrus flavoured so it's not overpowering at all.  I also got some warming spices coming through as the flavour developed.  Mouthfeel is distinctly average with a medium body and medium carbonation.
With the warm, spicy notes it reminded me of a winter ale so you just need a cold night and a roaring fire to get the best out of Otter Ale.  I loved it so Ale Be Seeing You all year round.
Brewed by Otter Brewery, Devon
4.5% ABV

My Untappd score: 4/5
Find out more at Otter Brewery
Posted by Michelle Ryles at 00:08 No comments: 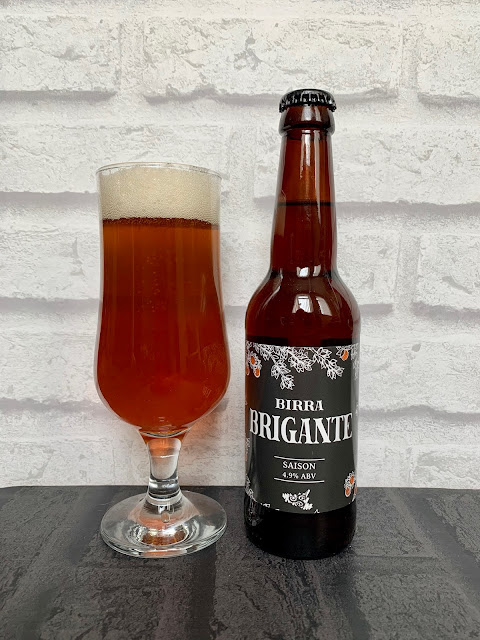 Wow this is a lively one!  This ale is very impatient to get out of the bottle and no matter how slowly I pour, I still get a huge head.  I had to pause mid-pour so, as there's a little bit of sediment in the bottle, I ended up with a slighly hazy toffee coloured ale with a robust, abundant cream coloured head.  The head maintains a good layer and lasts right to the last drop, even drinking as slowly as I do.
The aroma is very appealing; sweet caramel, tangy hops and fruity spiced orange.  It also has the sour whiff of a trappist ale so I was really intrigued to have my first sip.  What an unusual flavour!  It's deliciously malty with a hint of spiced orange and sour hops followed by a bitter, slightly metallic finish.  It does have the taste of a trappist ale which makes it something quite different in a saison.
I don't drink many saisons as I find them too fizzy and harsh but Birra Brigante is lovely.  It is fizzy but it's not too harsh and it has a medium body.  It's one of the best saisons I've had and I'm most impressed.  I love the maltiness and the added flavour of the orange peel that really comes through without being pithy.
Well done, Darwin Brewery!  This is one saison Ale Be Seeing again.  Birra Brigante is an exceptional saison that not only tastes great but has an amazing story behind its name involving General Garibaldi, who famously visited Tyneside in 1854.  Click here to visit Darwin Brewery's website to read the full story behind the beer.
Brewed by Darwin Brewery, Sunderland
4.9% ABV

My Untappd score: 4/5
Find out more at Darwin Brewery
Posted by Michelle Ryles at 00:14 No comments: 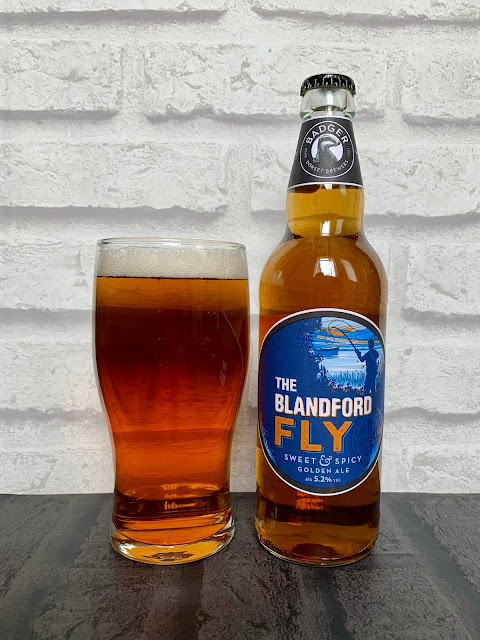 I love anything with ginger in it so I was really excited to try The Blandford Fly from Dorset brewers, Badger.  As much as I love a ginger ale soft drink, what could be better than a real ginger ale?
This is a beautiful golden ale, that you can see through the clear bottle (oh what a shame, I had to buy two for the photograph), and it pours with a loose and very rapidly disappearing cream coloured head.
As I was pouring there was a very strong smell of hops but as the ale fills up the glass there is a lovely warm spicy aroma of ginger and a hint of toffee too.  With such a lovely ginger aroma, I couldn't wait to dive in for a taste.
Oh heavenly ginger!  Badger have got this one spot on with a lovely sweet and spicy combination that doesn't let the ginger overpower the taste yet remains gingery enough for us ginger lovers.  The initial flavour is sweet toffee followed by a spicy ginger kick and rounded off with a lovely dry finish.  Despite the lack of head, it's well carbonated and has a good medium body for a golden ale.
So very dry and refreshing, The Blandford Fly is definitely one for the ginger lovers!  The ginger spice catches the throat nicely without being too harsh; that's the perfect amount of ginger in my opinion.  I loved it and Ale Be Seeing You again!
Brewed by Badger Brewery, Dorset
5.2% ABV

My Untappd score: 4.25/5
Find out more at Badger Brewery
Posted by Michelle Ryles at 00:57 No comments: