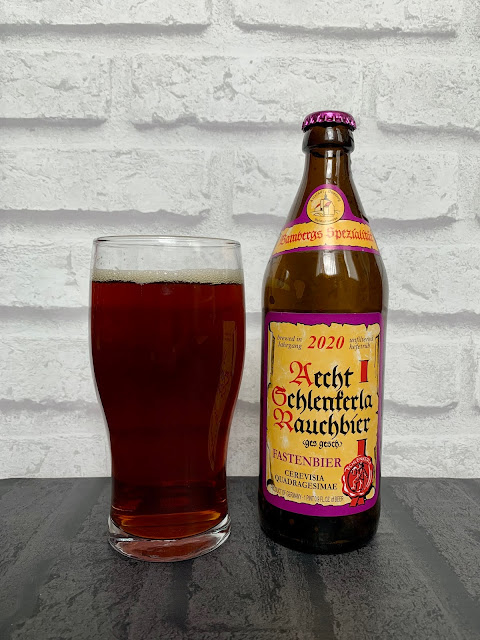 When I placed my first order with Honest Brew, I was intrigued by the Fastenbier from historic German brewpub Schlenkerla.  The bottle label is very striking and the beautiful deep amber/ruby coloured beer inside looks pretty good too.  The small, cream coloured head is quite loose and it disappears quickly leaving just a few bubbles around the sides.

The most striking thing about Fastenbier is the smell.  As soon as I popped the lid off I was hit with the smell of a German food market.  In fact, the first thing I said when I opened it was: 'it smells like bacon'.  I haven't eaten meat for almost 30 years so there may be some people who disagree with my description of this aroma, but the smell of this beer evoked memories of my Nanna frying bacon.  Aside from the smokiness, there's also a distinct malty aroma but I couldn't get past the bacon aroma so I was a little scared to lean in for a sip.

The taste is definitely better than the smell, and improves if you don't breathe in when you're drinking!  The initial flavour is sweet malts and burnt caramel followed by smoked meats.  A very odd combination but it sort of works and it did grow on me.  Despite the lack of head, it's surprisingly fizzy with soft carbonation and a medium body.

No wonder the sneaky monks invented this beer when they were fasting over Lent; it's like a bacon sandwich in a glass!  Although it's wasn't for me, I'm glad I tried it as it's a very good smoked beer and I much prefer a beer tasting and smelling of smoked meat rather than an overflowing ashtray.

Find out more at Schlenkerla Brewery
Posted by Michelle Ryles at 00:25