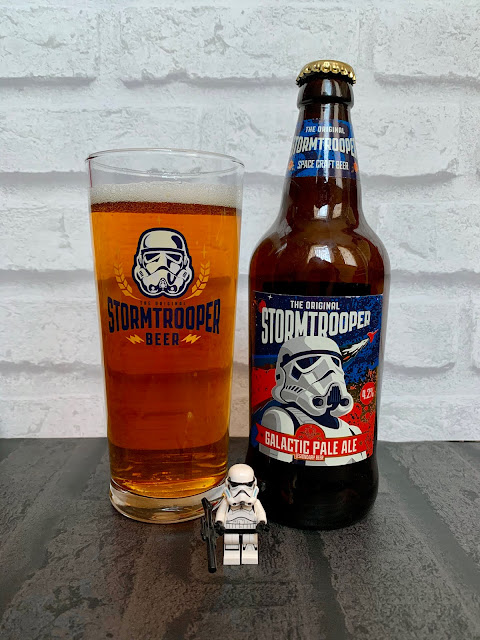 May the force be with you

My second beer review for Star Wars Day is this Galactic Pale Ale from The Original Stormtrooper.  I bought this one from the amazing House of Trembling madness in York before I picked up the gift pack with glass from B&M.

This pale ale pours a traditional deep golden yellow colour with a tight off-white head.  The head holds surprisingly well for a while before dispersing to a thin foam.  The aroma isn't terribly strong but it is mainly hops, biscuit and straw with a hint of orange citrus and honey.

Moving on to the taste which disappointingly isn't that strong either.  I could only really taste hops and honey before getting a dry and bitter aftertaste.  A weak taste coupled with soft carbonation and a thin almost watery body meant it wasn't an out of this world experience at all.  It took me a while to drink it and I found that the flavour does develop slightly over time into more of a bitter which I liked.

I honestly thought I would have preferred the Galactic Pale Ale to the Lightspeed Pilsner but the pale ale was just a bit too weak on flavour for me.  Don't get me wrong, it's not a bad beer but it only just scrapes a 4 pint rating, sitting right on the fence with a score of 3.5 out of 5.

Find out more at The Original Stormtrooper
Posted by Michelle Ryles at 00:54