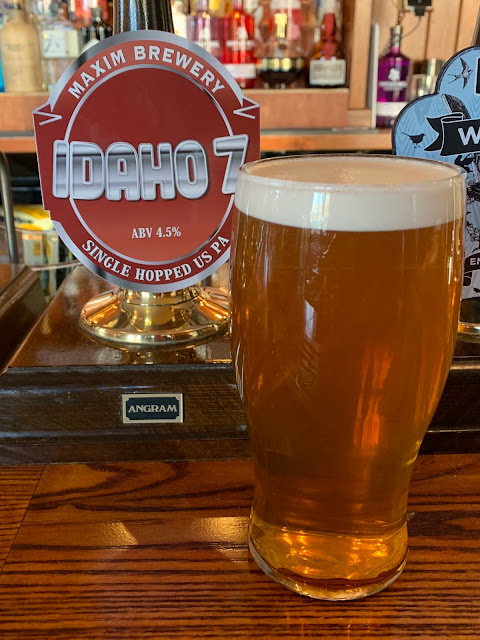 I'm a fan of local breweries and decided to try Idaho 7 from Houghton le Spring brewery Maxim whilst in The Marine, in South Shields.  I wouldn't usually go for a pale ale but I'd already tried everything else that was on sale!

Idaho 7 looks like a yellow Guinness; although it's slightly cloudy in this photo, it settles to a clear, deep golden yellow colour with a smooth tight milky white head.  It has a lovely aroma of citrus and hops, as well as a hint of buttered bread to balance out the citrus.

It's no surprise that the flavour is predominantly citrus, but there's also a hint of tropical fruits like pineapple and mango to take the edge off the citrus.  I think the citrus is more orange than lemon too which gets a thumbs up from me and it is just the right amount of flavour to not be overpowering but enough to deliver a bitter kick in the aftertaste.

Overall, it's crisp, dry and refreshing which makes it more palatable to me than a standard IPA.  It went down quicker than the head which left amazing lacing and was clinging to the glass as if its life depended on it.

Find out more at Maxim Brewery
Posted by Michelle Ryles at 00:16