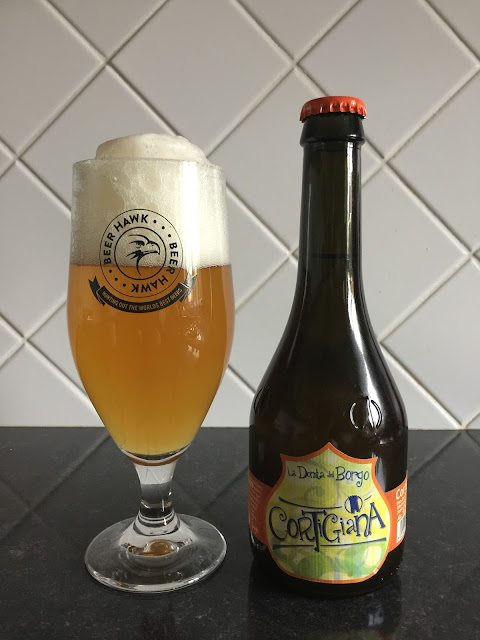 As it's New Years Eve, I thought there was no better time to pay some attention to my severely neglected beer blog.  I am still alive and drinking beer so I'm making a New Year's resolution here and now to blog more in 2020. 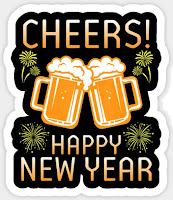 I bought a variety pack of Italian brewery Birra del Borgo ales and first up is Cortigiana.  This ale is a cloudy golden yellow colour with a very frothy tight white head.  There is quite a bit of sediment so it needs a careful pour, if you can, but mine burst from the bottle with such force that I didn't quite get it all out of the bottle and ended up with a huge frothy head.

At first I thought that it smelled strangely of vinegar but this soon disappears to be replaced by a strong citrus and hops aroma.  Now normally I'm not a fan of citrus but this has such a delicious aroma of orange, grapefruit and lemon that I found it very appealing.

The taste surprised me as I was expecting a huge blast of bitter lemon citrus but instead tasted a greater proportion of sweet sun-ripened oranges and zesty grapefruits than bitter lemons.  Blended with the sourness of the hops and a hint of herbal notes, the lingering bitterness is very pleasant indeed.

It's a full bodied ale which is very fizzy with relatively harsh bubbles, which tickle rather than tingle the tongue.  I was surprised how much I liked it and found it a very crisp and refreshing continental pale ale.  It hasn't converted me to pales but Ale definitely Be Seeing You again, Cortigiana.

Find out more at Birra del Borgo
Posted by Michelle Ryles at 12:21 No comments: