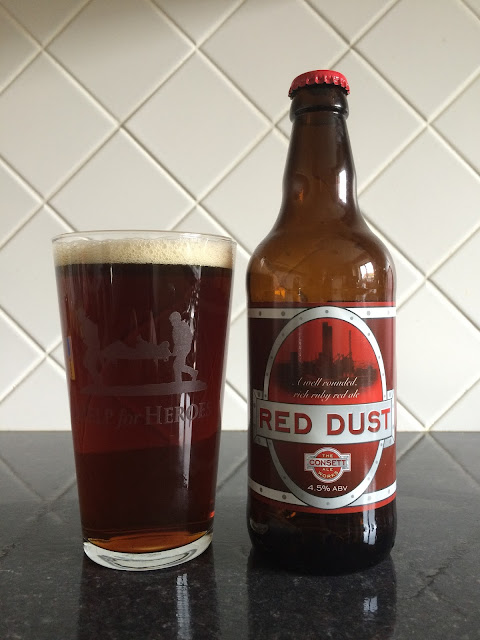 This is one of my old favourites after being introduced to it by a real ale loving ex-boss who used to buy it by the case.  It is named after the red coloured clouds of dust that were formed during the steel making process in the famous Consett Steel Works.

Red Dust is a beautiful deep rich mahogany colour with a frothy beige proper Northern head, although the head does disappear quickly there is enough left to lace the glass.  It smells deliciously fruity on opening with a strong malty aroma which left my mouth watering in anticipation.

Despite the strong aroma, the flavour is not terribly strong but it is absolutely sublime with hints of toffee and biscuit but a definite taste of malt and bittersweet hops.  There is a slight citrus bitter aftertaste that rounds it off nicely.  It is softly carbonated to give a pleasant tickly tongue feeling.

I really like this one, it's easy to drink and not overpowering in flavour; it won't give your tastebuds a work out, it's just a damn fine ruby ale.  Of course, Ale Be Seeing You Again.

Find out more at Consett Ale Works
Posted by Michelle Ryles at 12:42 2 comments: