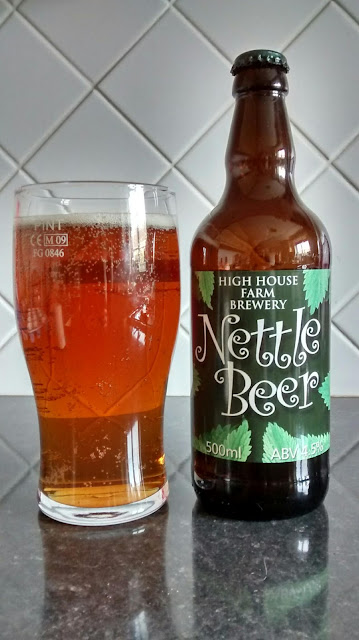 I've been on the lookout for Nettle Beer for quite some time, it is really hard to get hold of as it is only brewed once per year in the Spring.  It is an amazing light golden amber colour and strangely aromatic.

There is a slight floral or honey aroma on pouring, I can't quite describe it as it is something I have never smelt before.  It's almost like sugar coated cut grass; really unusual and distinctive.  I would go so far as to say that it smells green, hilariously reminding me of Percy in Blackadder when he invents the gem called 'green'.

There is not a great head on it and it virtually disappears before I can get the glass to my lips.  So on to the taste...at first I would say it doesn't have a lot of taste but then I'm hit with smooth honey tones and the taste of 'green'.  It's so refreshing and slightly sweet that I think that if I had a blind taste test, I would find it hard to decide whether it was a very unsweet cider, a slightly sweet ale or a cider/ale mix of both.

Based on a 14th century recipe and only brewed once per year, this is the holy grail for beer lovers.  Everyone should try Nettle Beer at least once - it's so unusual and, with a different taste in every mouthful, so difficult to describe that I know Ale be Seeing You Again!

Find out more at High House Farm Brewery
Posted by Michelle Ryles at 13:37 No comments: 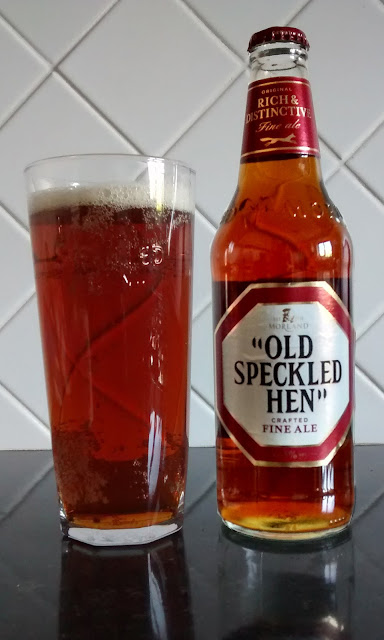 I often overlook Old Speckled Hen as it is so readily available, but as soon as the malty aromas poured out of the bottle I realised that it really should be one of my staple ales. The colour is a beautiful deep amber and although there is only a small head it has just enough fizz to keep a little head as the ale is quaffed.

It smells of malt, toffee and fruit and leaves a smooth toffee aftertaste on the tongue.  With a small amount of lacing on the glass, it doesn't really lose any body as the head disappears.  As the bubbles burst on my tongue I was reminded of home-made cinder toffee that Nanna used to make.  Simply delicious!

A lovely deep amber colour reminiscent of molten toffee, and a deliciously malty taste make this a smooth ale that Ale be Seeing Again.

Posted by Michelle Ryles at 12:39 No comments: 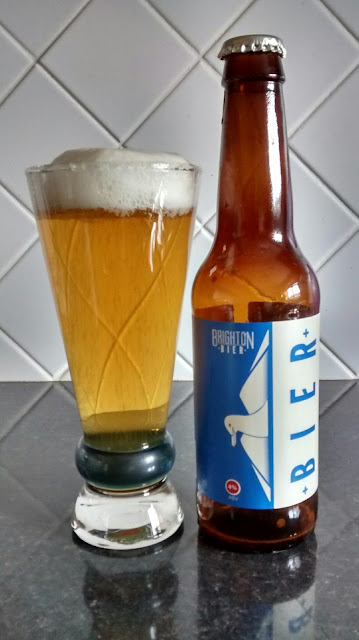 This has the most amazing tropical fruit smell oozing out of the bottle on opening - I can smell pineapple and mango as the bright sunshine yellow ale transports me to sunnier climes.  There is a lot of fizz in this pale ale, as almost champagne-like bubbles rush to the surface, and consequently it has a massive head.

On to the taste!  After I got through the head it has an almost overbearing flavour of grapefruit citrus and I didn't like it at first.  It has a very bitter strong grapefruit taste that is a little too harsh for me.  It fels almost as if I had a whole grapefruit in my mouth; pith, skin and all.  I definitely got used to the taste and I'm never one to write off a beer but Ale not be seeing this one again.

Find out more at Brighton Bier
Posted by Michelle Ryles at 12:33 No comments: